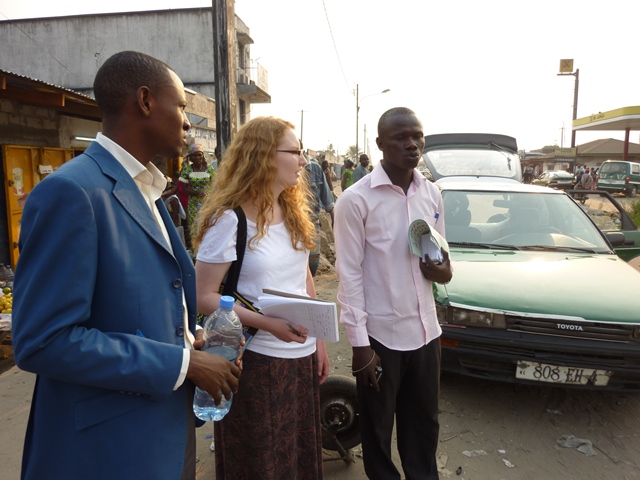 Precy, Christie, and Chancey wait for a cab

Our first full day in Brazzaville dawned clear and cool. The weather is mild in central Africa in June, making the mornings and evenings especially pleasant. Each day at HOPE Congo begins with a 30-minute staff devotional, and on this morning we focused on the foundational reality of God’s love.

Once this time was completed, Christie and I joined HOPE Congo’s spiritual integration officer, Precy Ngondui, as he hailed a cab that would take us to our first client meeting of the week. Cabs are plentiful and inexpensive in Brazzaville and are the preferred mode of travel for HOPE Congo’s loan officers. During the ride Precy explained that we planned to join the group Les Solidaires, which means The Solidarity, though if we arrived in time, we could first visit another group that was finishing its meeting in the same area.

The cab wound its way through the busy streets of the city, as thousands of businesspeople hurried off to offices or to set up shop in the market for the day. Stopping around the corner of a large abandoned building, we jumped out and approached a group of clients sitting on benches under a large tree. This group was called Les Semeur (The Sower). Their meeting was wrapping up, and we began greeting clients and learning about their families and businesses. Meeting clients is one of the greatest privileges of my work with HOPE. But after a few minutes of enjoyable discussion, loud, angry shouts pierced the calm of the morning.

Down a small hill about 20 yards away, a group of six or seven people had formed. We heard more shouting in the local language, Lingala, and although we had no idea what was happening, the emotion of the moment transcended language. Someone was really angry. Precy disappeared for a moment to join the group. When he returned a few minutes later, he explained that a teenage boy around 17 years old had approached the members of Les Semeur that morning, asking for prayer, and was being accused of stealing from one of the women in the group. The boy denied having stolen anything, while the woman claimed that he must have hidden the money and was lying.

I don’t know what it is about having someone steal from us, but most people’s natural reaction is that it makes their blood boil. And blood was boiling that morning. A pastor of the local church was there, and he gently restrained the boy while all the members of Les Semeur gathered to sort the situation out. The angriest members continued to demand that the boy confess, and as things heated up, a woman struck the boy with a stick she had been carrying.

Precy, the local pastor, and a few of the leaders from Les Semeur intervened repeatedly to bring peace and calm. The stalemate finally ended when the boy cracked under the pressure and showed the woman where he had hidden her money. After a few more heated statements and shaking of fists, the crowd dispersed.

The pastor continued to hold the boy close, which provided an opportunity to talk with him. The boy told us that his name was Ndala. He face was full of shame, though it was unclear whether he felt true remorse or was just upset that he was caught. But it was in this moment that the natural human reactions were set aside and the love of Christ permeated this scene.

Rather than layer on more accusation, Precy and the pastor shared the love of Christ with Ndala. We invited him to receive Christ and all prayed over him, asking that God might rescue him from a life apart from Christ. The pastor invited him to join his church on Sunday and gently encouraged him to trust in Jesus.

Ndala looked genuinely surprised—this wasn’t what he expected. I believe that he expected to receive more anger, bitterness, and retribution. After all, isn’t that what is supposed to happen when you steal from someone and get caught? But God’s Kingdom is not about what comes naturally. Because of Christ’s amazing love and grace, Precy and this faithful pastor responded with justice, love, and hope. To my knowledge, Ndala did not surrender his life to Christ that day, but I pray that he finds and embraces the One who rescues each of us from our natural responses and broken lives.

2 responses to Theft … anger … and love?