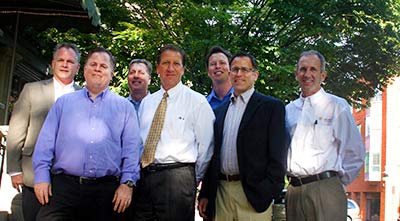 The HOPE Bankers’ Club could never be confused with one of HOPE International’s community banks—after all, members meet in an air-conditioned room off a paved street in Lancaster, PA—but there are striking similarities between this group and those meeting overseas. Much like HOPE’s clients, the group of 10 entrepreneurs meets regularly to trade business best practices and learn from one another’s experience. They work in different sectors—from real estate, to insurance, to food packaging—but each is an entrepreneur from the same community, with an understanding of the unique challenges and opportunities of their operating environment. Like so many of their community bank counterparts, members of the HOPE Banker’s Club also spur one another not only to greater financial success but also to glorifying God through their work.

The HOPE Bankers’ Club began meeting in 2009 , bringing 10 men together once a month to learn from a guest presenter, support one another with ideas and accountability, and give back. The group’s co-founder, Jim Cascio, says generating interest in the group was easy, as the idea struck a chord with many Christian businessmen he knew within his church and community. Participants agreed that God was calling them to use what He had entrusted them to bless others. Because many of the men within the group already supported HOPE International’s work, members decided that supporting HOPE—and aspiring entrepreneurs around the world—would be part of the group’s DNA.

“What a victory!” says Bankers’ Club member Delbert Turman, describing his first impressions of Christ-centered microenterprise development. “Rather than going in and providing assistance, it enables people to help themselves—such a simple process, but brilliant!” He’s been particularly impressed by HOPE’s clients’ determination to escape seemingly hopeless situations. “They say, ‘That’s not good enough. I’m going to find a way,’ and for HOPE to be that way is amazing to me. … It’s a game-changing event.”

Two current members of the group have traveled to Ukraine, HOPE’s initial country of operation, to witness the impact firsthand. “I recognized that HOPE is working economically and spiritually, which is a dynamic duo,” says Larry Ferguson, a group member who visited Tomorrow Clubs, a children’s ministry partner supported in part through the profits of HOPE Ukraine’s microfinance ministry. “When I look back and think, ‘What did I spend myself on?’ I want it to be something that made a difference. … And HOPE and Tomorrow Clubs are making a huge difference.”

Through their example, the HOPE Bankers’ Club hopes to inspire similar groups across the country to make a difference, helping businesspeople succeed in business so they can excel in giving. Their own group of 10 has committed to donating $10,000 a year to HOPE’s ministry. “We’re trying to grow our businesses so we can give back to God,” says Cascio. “We’re trying to grow our businesses so that we can continue to support HOPE, and we’re trying to tell this story to whoever will listen so that maybe they will follow suit.”

Members of the HOPE Bankers’ Club are willing to share their group’s experience with others who may be interested in forming similar groups. For more information, please contact HOPE International at info@hopeinternational.org.