HOPE Congo: A Family at Heart 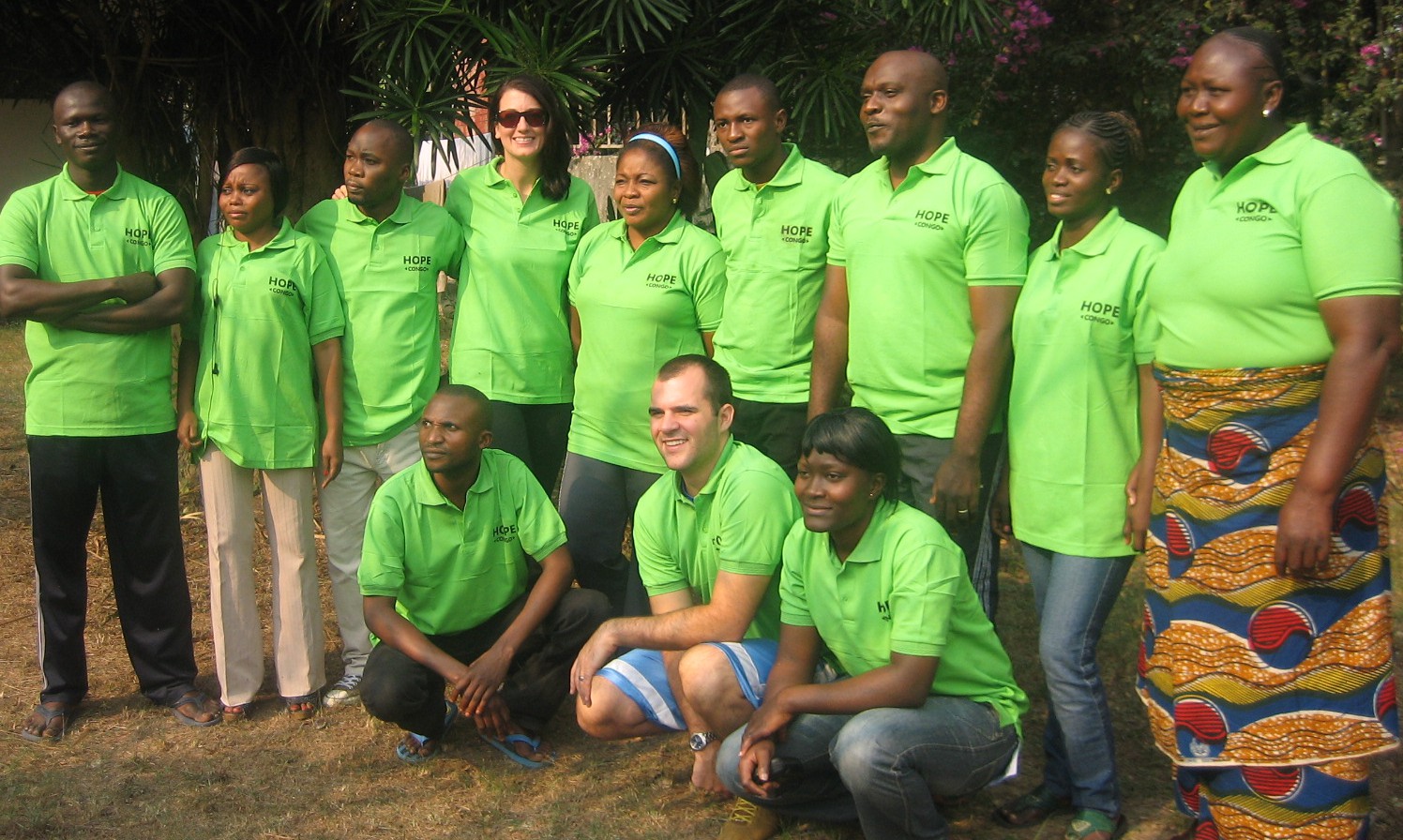 HOPE Congo had its annual spiritual retreat June 27-29 at Vuela, a Catholic retreat center just outside of Brazzaville. It was a great place to get away from the city noise and see trees, flowers, and grass. All 37 of us piled into a bus and the HOPE truck and arrived at Vuela Friday morning. The office was split into three teams: the green, red, and yellow teams. Each morning we had a time of praise and worship led by one of the teams, and three office staff spoke throughout the weekend. This weekend was a great time for me and Nate to spend quality time with the staff. 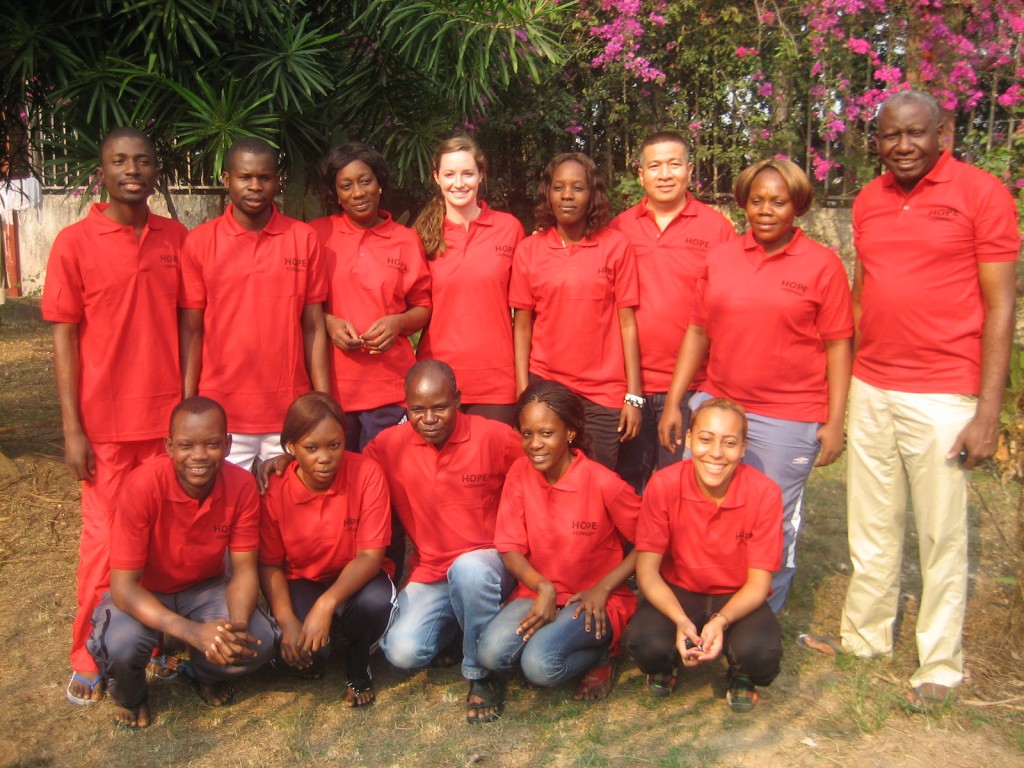 Allie (top row, fourth from left) with the members of the red team

The theme for the weekend was “Rooted in Christ, Growing in Faith.” Manny [HOPE Congo’s outgoing director] began the weekend by speaking about the importance of digging our roots deep into Christ by reading the Word, praying, studying, meditating, and memorizing the Word. He read a verse from Psalms explaining how we must remain rooted in Christ for sustainment like the tree remains rooted by the river for water.

Loveline, the loan supervisor, spoke next about how even as we root ourselves in Christ, this doesn’t mean the storms of life will not come. Loveline lost her husband a few years ago. As well as dealing with this loss, she was also pressured by her family to do certain customary acts followed in her culture. She explained how she felt God would not be pleased if she did these things instead of trusting and leaning on Him. She was ostracized by her family because she did not do these traditional acts. She explained how her faith in Christ grew as He sustained her though this dark time in her life. Clement, the HOPE accountant, spoke the last day on Joshua 1:7-9, encouraging everyone to be in the Word daily. He encouraged everyone to be confident in our faith, and to trust God as He works in our lives. 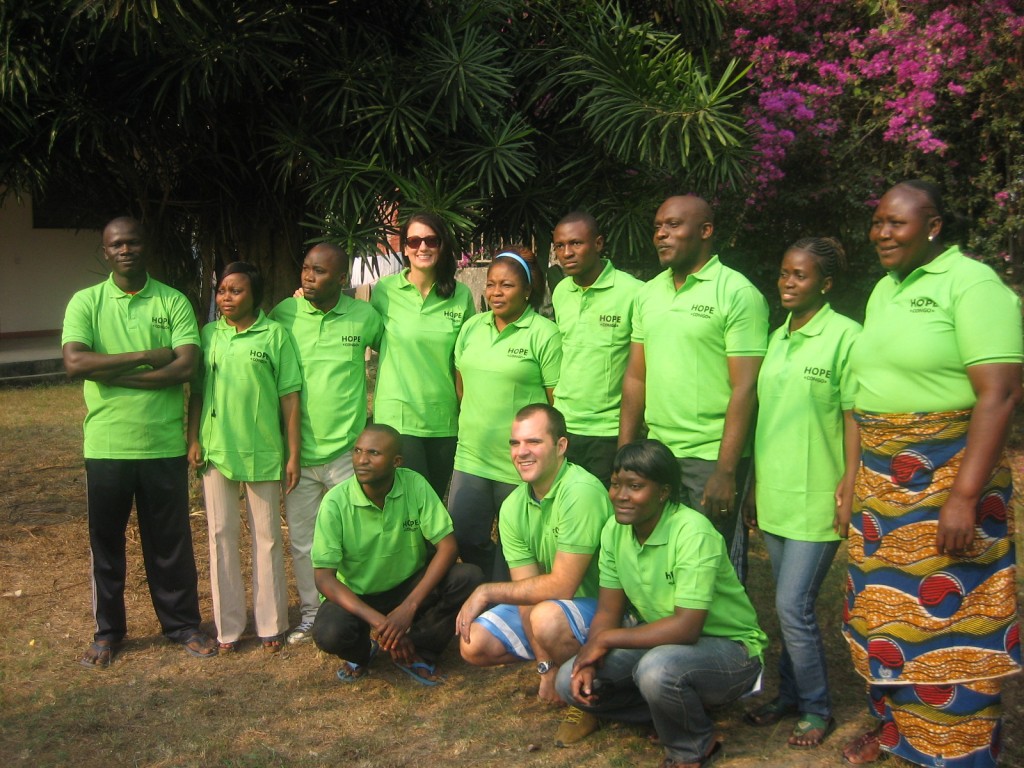 We also enjoyed fun games with some intense competition between the teams. Each team made a chant to yell throughout the weekend and wore the same color T-shirts each day.

I have been personally blessed by this weekend. The time of fellowship and great insights from colleagues made me so grateful to be in Brazzaville and a part of the HOPE Congo team. I have been living in Brazzaville for almost nine months now and am feeling like I have some true friends in Christ. The HOPE Congo staff are such an encouragement to Nate and me. They always greet us each morning with a contagious joy. Their passion for the mission of HOPE and God’s call on their lives is inspiring. The most meaningful time for me was the last day’s worship time. The staff were asked to give a testimony about how God had touched their lives through this weekend or through HOPE. I was tearing up through each testimony that was given.

Here are summaries of a few of the testimonies:

Alix’s father died when she was young, and her mother died a few years later. Her extended family raised her. As an adult she began to really feel the loneliness of not having her parents. She felt everyone had a place to call home, except her. She started working with HOPE Congo in April 2011. The HOPE staff have become like family. She now feels like she has a place where she belongs. 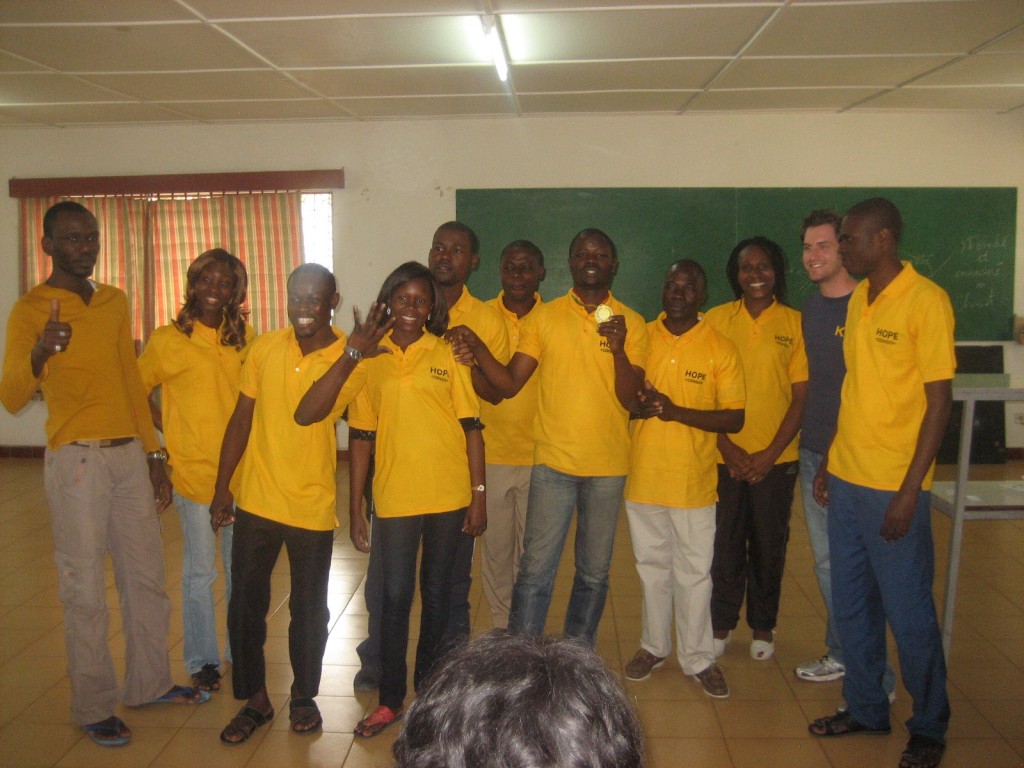 Espoir’s parents died when he was very young. He was raised by his aunt but was often treated like an orphan. His childhood was a difficult one. He was given old clothes, did not have a blanket to sleep with, and was not able to eat at every meal. He was able to obtain an internship at a local business. One day Espoir was praying at this office. His boss decided Espoir couldn’t pray at work because it wasn’t productive. Espoir was very upset and felt this was not a place he wanted to work long term. He began looking for another place to work. Espoir started working with HOPE Congo in February 2012. He is thrilled to have a place where he can both do meaningful work and worship God.

Martine’s mother is Russian and her father is Congolese. Her parents divorced when she was young. Her mother moved back to Russia, but Martine stayed with her father in Congo. She has not seen her mother in almost 10 years. Martine is new to the HOPE family, having started in May 2012. Before she began with HOPE she felt lost and had no direction in her life. A close friend who was also a loan officer at HOPE told her to apply for an open position with HOPE. Martine applied and was hired! Her first day at HOPE, she woke up very sick but was worried that if she didn’t come the first day, it would give a bad impression. She decided to come to the office but felt very ill and discouraged. She joined the morning devotions and prayed that God would heal her because she needed to be 100 percent on her first day. After the prayer time she felt much better and knew it was God telling her this is where she is supposed to be. She already feels close to the HOPE staff and calls them her family.

Darcelia’s parents divorced when she was young. After the divorce she lived with her father. Even though her mother still lives in Brazzaville, Darcelia has not see her in years. Her mother refuses to see her. Darcelia explained, “It was very difficult growing up without a mother’s love.” She said that she wishes she was an orphan instead of having a mother who doesn’t want to see her. When she started working with HOPE in February 2012, she found love, acceptance, and a family at HOPE. When Darcelia was finished with her testimony, Loveline, the loan officer supervisor, stood up, embraced her, and said she would be her mother. Loveline expressed her love for Darcelia, as Darcelia cried in her arms. It was a beautiful expression of God’s redemptive love.

Allie and her husband, Nate, are currently serving HOPE in the Republic of Congo, Allie as a volunteer and Nate as finance manager. The reflections above have been reposted from their blog, “The Hills with HOPE for the Congo,” where you can read more about their time in Brazzaville.