“Affordable nutrition on every table” 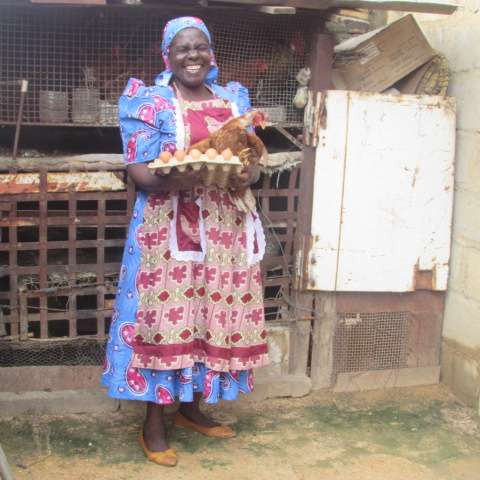 When Tinashe Butau in Zimbabwe lost her husband, she was left as the sole provider for her four children. For years, Tinashe struggled to put food on the table. Despite her entrepreneurial spirit and work ethic, she felt that there were no options for her to move forward. So when a respected elderly friend told her about a savings group meeting she had just heard of, Tinashe was eager to learn more.

“I was tired of living from hand to mouth,” she says. “The group provided a means out of poverty and beyond living hand to mouth.”

Joining a savings group through her local church in September 2014, Tinashe began putting aside $20 each month. In a group made up of mostly widows and single mothers, the group quickly became a source of deep community and growth for Tinashe. “The Lord has really taken care of us,” she says. “He is our husband. And we have each other.”

With a loan from the group, Tinashe was able to grow her peanut butter business by purchasing a peanut processing machine, eliminating the cost of paying others to roast and grind her peanuts. As her business has grown, she’s been able to employ one of her sons and his wife.

Tinashe also used a group loan to purchase a welding machine from South Africa to start a welding and steel fabrication business in partnership with her other son, who was  previously unemployed. She also was able to purchase 10 chickens to produce eggs, as well as a sewing machine to start making children’s clothing and school uniforms. In the future, Tinashe hopes to save enough money to obtain her driver’s license and a delivery car for her peanut butter business.

As her income has stabilized, Tinashe has greater capacity to care for others in her community, desiring for her neighbors to have access to healthy food at a reasonable price. Her desire is to “ensure that there is good and affordable nutrition on every table,” she says, seeing her peanut butter and egg businesses as ways to provide nourishing, filling food to her community. Recognizing that many of her neighbors often do not have disposable cash, Tinashe encourages them to bring their own jars for a discounted rate on peanut butter. Customers can also receive a free jar of peanut butter if they bring 10 jars. In addition to making the peanut butter more affordable, this practice also encourages community members to recycle.

Passionate about wisely stewarding the resources she has, Tinashe suggested that her group save for their dreams in the first half of the savings cycle and save for household items in the second half of the cycle. Together, they buy groceries in bulk and distribute them equally. Tinashe taught many of them how to bake homemade bread, avoiding spending excess money on expensive pre-made loaves.

She also purchases groceries for her mother-in-law and supports her nephew through college. “As a good steward, I am honored to share. … I have learned a lot about relationships and God’s expectations for us in those relationships,” she says.

For Tinashe, being a part of the savings group has empowered her to grow both her business and to better serve her community. Reflecting on her experience in the savings group, she says, “It doesn’t matter how little you think you have; being in a group makes that seemingly insignificant money multiply and opens your life to limitless possibilities. I have peace and joy, thanks to the savings group.”

3 responses to “Affordable nutrition on every table”