Andonie’s story: “We can go the places we want to go.”

Each year, HOPE celebrates clients who demonstrate our values of perseverance, compassion, character, and creativity by announcing the Thurman Award winner. Established in honor of HOPE’s first CEO, the Thurman Award celebrates clients who have not only experienced change in their own lives but have also extended that transformation to others in their community. We’re excited to share the story of Andonie, this year’s winner of microfinance programs!

A member of the Mandaya tribe, one of nearly 200 indigenous people groups in the Philippines, Andonie Digaynon grew up in a culture where education wasn’t highly valued. Not only was the school a long, difficult walk from his rural home, but his family needed him to help earn money. As a result, Andonie dropped out of school after the second grade.

But Andonie hasn’t let his limited education hold him back.

Today, he owns a successful business producing chicharon, a popular local snack food made out of pork skin. He and his wife, Elfa, have adopted two children and are using their resources to invest in young people. As Dexter, their son, describes, “Papa is an inspiration to others because, despite having only a second-grade education, his family has never gone hungry.”

After learning to make chicharon from a relative, Andonie spent a year and a half perfecting his own secret recipe. “Sometimes, I would find myself in tears,” he recalls of the long process of trial and error. Andonie used initial loans from the Center for Community Transformation (CCT), HOPE’s partner in the Philippines, to purchase ingredients and supplies.

As his business has grown, Andonie has used subsequent loans to renovate his home, where he produces and packages his product, and to purchase a lightweight van for deliveries.

He now sells over 5,000 pounds of chicharon a month throughout General Santos City and the surrounding region. 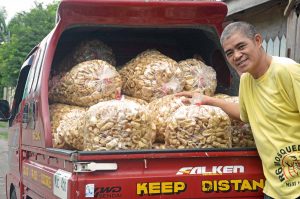 In addition to business growth, Andonie appreciates how his relationship with CCT has helped him mature in his faith. Though only 9 percent of the Mandaya people identify as Christians, Andonie grew up in a family of believers and came to know the Lord at a young age thanks to the outreach of Filipino pastors. Today, Andonie’s faithful presence at CCT’s weekly fellowship meetings, despite his busy schedule, inspires others to follow his example.

Knowing the challenges he’s had to overcome, Andonie cares deeply about education. He supported Elfa as she attended college and is proud of her current work as a town councilor. He also helped send Dexter and another relative to college.

Andonie and Elfa have also opened their home to seven teenagers from his home community. Just like when Andonie was a child, these boys and girls are statistically unlikely to graduate, but thanks to Andonie and Elfa’s hospitality, they are all now attending quality high schools in the city.

Andonie praises God for the transformation he has seen in his family’s life: “I thank God that I am no longer poor, that my family can eat three times a day … and that we can go places we want to go.”

Around the HOPE network, clients are growing closer to Christ, saving their own money, and employing their God-given skills to care for their families. Learn more about how HOPE equips families to flourish.