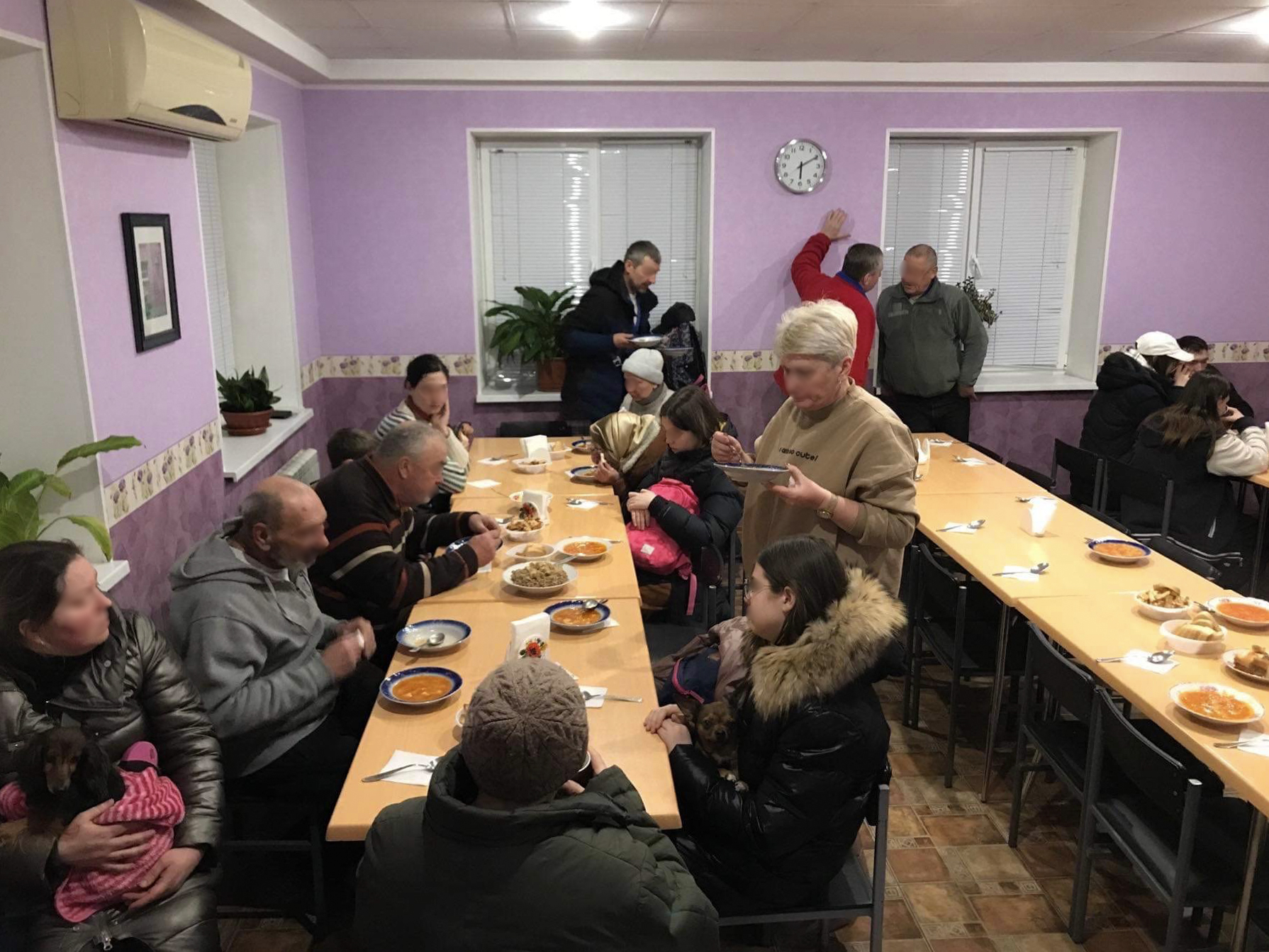 We are now in the third month of the war in Ukraine, with heavy fighting continuing in the east and south of Ukraine where Russia has occupied several cities where HOPE Ukraine operates. Missile strikes continue in Kyiv and other areas across the country.

The United Nations is reporting that more than 5.6 million Ukrainians have now fled the country as a result of the war. And 7.7 million people are displaced internally—most fleeing the violence in the eastern and southern regions. 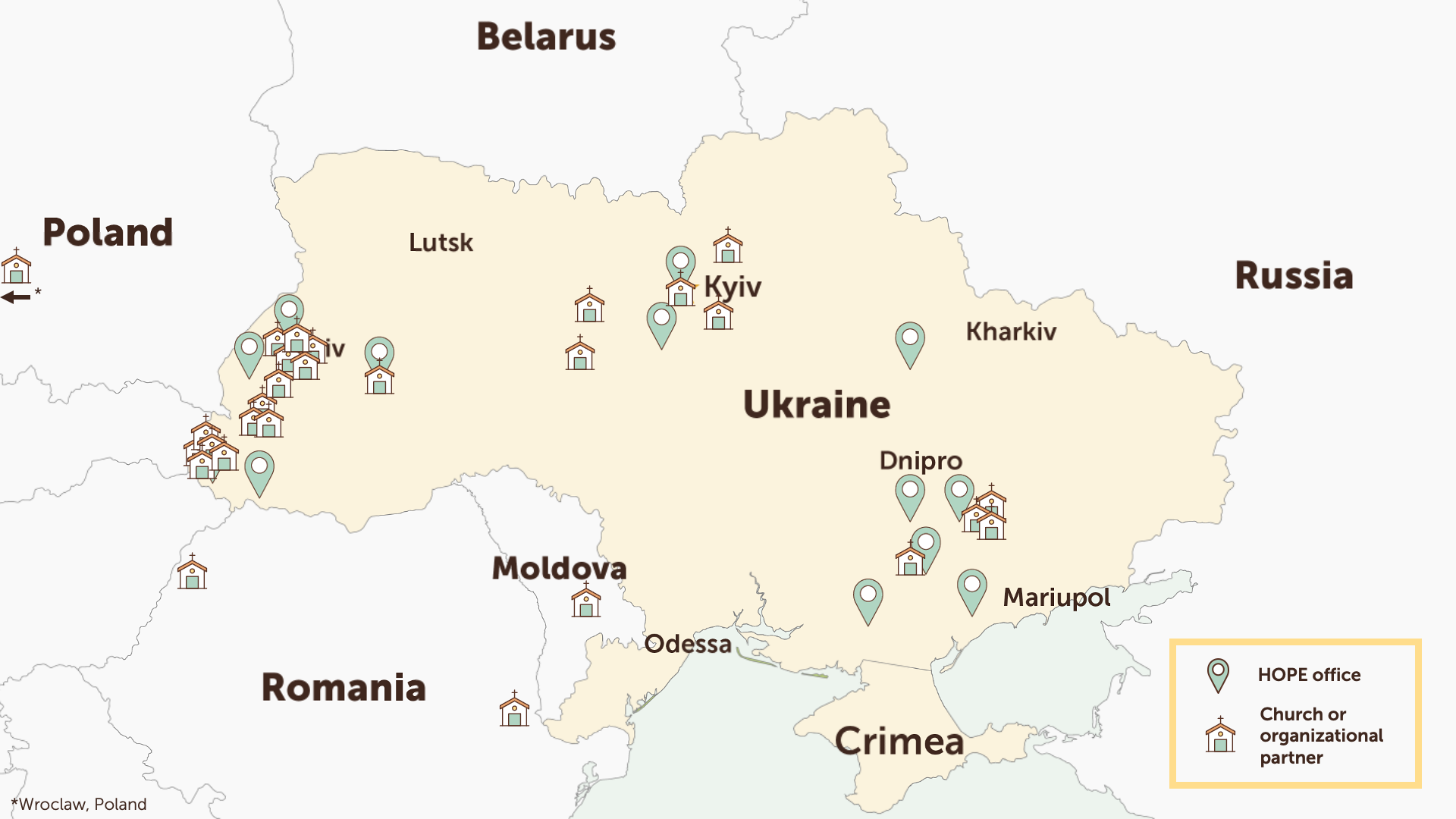 A map of where HOPE Ukraine offices are located in relation to our current church partners who are providing small-scale relief and assistance to people impacted by violence in the east and south.

While we grieve the suffering experienced by our staff and people we serve, we’ve witnessed local churches and HOPE Ukraine staff members welcoming in both neighbors and strangers affected by the violence and losses of this war.

HOPE Ukraine staff have been checking in with each farmer and business owner they serve–more than 500 people. Almost 70% of the people HOPE Ukraine serves live and work in territory occupied by Russian military forces in southern and eastern Ukraine.*

How is HOPE Ukraine helping these entrepreneurs?

HOPE continues to extend grace periods and repayment flexibility to each loan holder. During check-in calls, staff offer to pray with them, share advice, and in some emergency cases provide direct financial assistance.

These are two brief testimonies of how HOPE Ukraine staff in southern Ukraine (currently under Russian occupation) have reached out to those they serve there, helping both personally and with HOPE assistance funds.

Caring for 10 children (three biological and seven adopted), Tetiana** struggled in the first weeks of the occupation to feed her family. When a HOPE Ukraine staff member called her, Tetiana told her about the difficult situation she was in. Social service payments from the government had not come through, and all the food she had in store was being used very quickly. The staff member shared this information with other staff and they collected a large box containing cereal, flour, oil, and some money. Along with that, a local church joined in to help. Tetiana was very thankful for this help. It enabled her to live through the hard times until her social service payments were reinstated.

Before the war, Taisia** planted lettuce and hoped to sell it at profit. However, because of the war, the prices were very low in the village and in the nearest city, and it was impossible to take it to another city. So, Taisia brought it to her church and gave it away to others. With no money or income, she wanted to leave Ukraine until she could return and be able to work. HOPE Ukraine offered her a small financial gift, which allowed her to evacuate from the occupied territory and travel to safety abroad.

If you would like to support our HOPE Ukraine assistance fund, you can learn more here.

At HOPE, we’re fervent believers that prayer is the most important part of our work. To join us in prayer for Ukraine and other countries throughout the HOPE network, you can sign up for our monthly prayer update here.