Working with the poor

Leap: From Abandoned to Provider

Read how Svetlana Shepeleva used a loan from HOPE Ukraine to provide a better future for her family, and visit leapfwd.us to learn more about how you can help clients like Svetlana this February 29.

Before taking out loans from HOPE Ukraine, Svetlana stayed home to care for her three children while her husband provided for the family. When her husband’s business failed 12 years ago, however, he turned to alcohol as a refuge and left Svetlana and the children to provide for themselves. Svetlana and her entire churched prayed constantly for her husband, and several months later, he returned and repented. 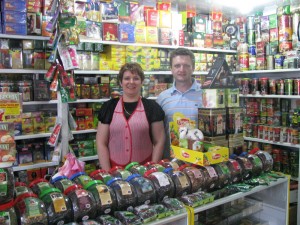 While the family was reunited, they were forced to start over again. With no capital, Svetlana and her husband became employed at a market that was only open two days a week. Each day, they had only two or three bags of flour and sugar to sell, leaving them only enough profit to buy bread and milk for their family. When Svetlana took out a loan from HOPE, however, she was able to use the capital to increase her inventory. Gradually, as the couple accessed more loans, they were able to offer more products, build one kiosk and then a second, and finally move into a small store.

Now, not only is Svetlana able to feed her family and improve her home, she was also able to send her oldest daughter to medical school. As someone who has seen firsthand the difference that steady employment can make, Svetlana hires former drug addicts who might not otherwise find a job. She and her husband give credit to God for everything that they’ve been able to accomplish. “We are not afraid of difficulties,” she says. “Let difficulties be afraid of us!”