Timothy Kayera spoke with been-there-done-that confidence. He grew stronger with each word, pulling me closer with the fire of his conviction. And then he summarized everything I believe about charity. In four words.

I used to work with one of those organizations that gave stuff away to everyone. We’d give away animals, clothing, and clean water. All for free. I remember when we’d give goats to people, I would get phone calls and they’d say, “Timothy, your goat is dead.”

Your goat is dead. I’ve tried to articulate this idea dozens of times over the years, but never this potently. In four words, he said:

Kayera is a star in Rwanda’s promising cast of young leaders. He directs HOPE’s efforts in a region of Rwanda and he emphasized the difference of his new job. His work now creates dignity, not dependency. Partnership, not pity. Timothy joins a chorus of Rwandans in this song, from the president of the country to “Rwanda’s Desmond Tutu.”

[The poor] are as capable, as competent, as gifted, and as talented as anyone else. … In society, you must create opportunities to help people develop their capacity and talents. – Paul Kagame

We need to move from aid to production, from existing to living. It’s high time we stop telling our people they can’t do it. They can, yes. And we shall do it. – Bishop John Rucyahana

Timothy, President Kagame, and Bishop Rucyahana share this opinion: Traditional charity erodes the nature of people and the fabric of society. When giveaways permeate, they communicate a clear message: What you lack, I provide. Where you are weak, I am strong. When you can’t, I can.

It’s a bad message, preventing people from hearing the better message from their Creator: I made you to make. I designed you to design. You are blessed to bless others. When charity runs its course—as it has in many places in Rwanda, Haiti, and elsewhere—it lures the poor with handouts and traps them on unneeded life support. 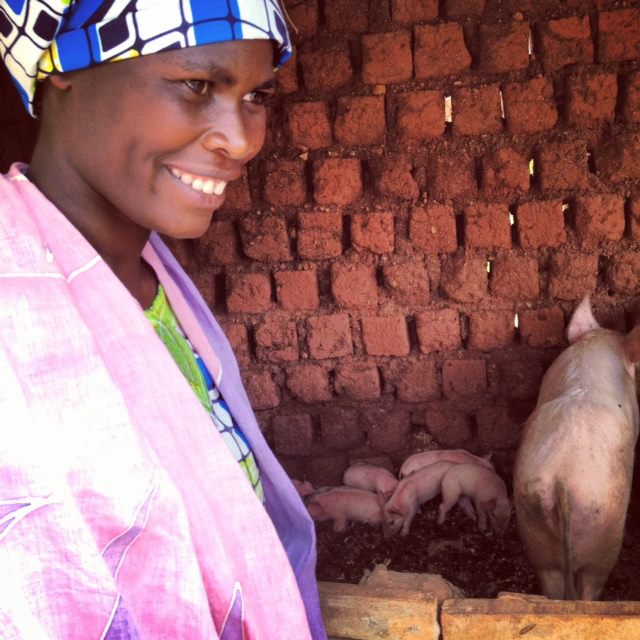 But that’s why Timothy got out of that business. He saw its destructive path and cut the cord before it strangled. Today he anchors his work on who people are created to be and what we are designed to do. He doesn’t lure with goodies. Instead, he demands hard work from those he serves. People like Rachel.

I saw the future of Rwanda in her. Rachel showed me the house she built and the 16 pigs she purchased over the past two years. She showed me the litters of piglets she’s bred and the piles of fertilizer she sells. But Rachel isn’t filling her barns for herself. I asked her what her dreams are and she said, “The greatest joy of these pigs is that I am now able to share with my church and with others.”

Rachel didn’t beg for cash or stoop in compliance. She stood tall as a confident merchant, wife, and mother. She did not avert her gaze. She was strong and generous. Rachel wasn’t the product of charity. She simply knew who she was created to be.

Support dignity rather than dependency by becoming an Adventure Capitalist and creating opportunities for clients like Rachel to become contributors to their communities. Learn more.

Chris Horst is the chief advancement officer at HOPE International, where he employs his passion for advancing initiatives at the intersection of faith and work. Chris and his wife, Alli, have four children—Desmond, Abe, June, and Mack. Chris serves on the board of the Mile High WorkShop. He loves to write, having been published in The Denver Post and Christianity Today and co-authored Mission Drift, Rooting for Rivals, and The Gift of Disillusionment with Peter Greer. Christianity Today, WORLD Magazine, and the Evangelical Christian Publishers Association named Mission Drift a book of the year in 2015. Chris graduated with both a bachelor’s degree from Taylor University and an MBA from Bakke Graduate University.