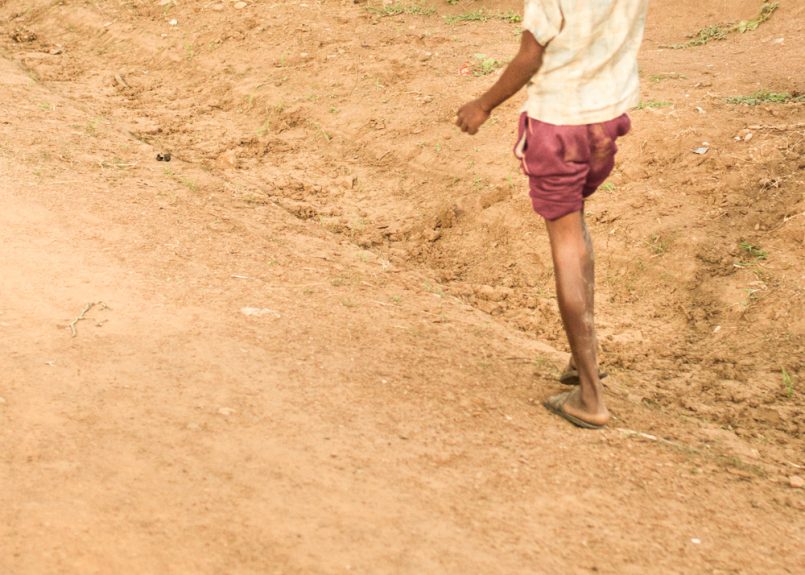 The little boy wore only a pair of shabby shorts that appeared to have once been khaki-colored. Reddish dust covered his body from his cheeks to his feet. I noticed that he was barefoot.

Startled by Shami’s words, I blinked, taking in the boy’s appearance as our car passed by, leaving him in the distance.

Shami continued. “People see kids like this, who are covered in dust and aren’t wearing a lot of clothes, and they assume: This kid must be so poor, he can’t afford to bathe or wear clothes—when, in reality, this kid is just a kid in a dusty climate who likes to play in the dirt and whose mom wants to keep his clothes clean.”

I swallowed, struck with the conviction that I’d been guilty of the very assumptions Shami described. He’d read my mind; I’d taken a glance at this boy and put him into an easy category—“poor.”

I looked down at my black sandals, the front scuffed to the point of fraying and the sole worn paper-thin. I’d gotten far more than my fair share of use out of these $10 Kmart shoes; yet, even as they deteriorated, I continued to wear them. In American culture, tattered clothing can be interpreted in a myriad of ways—as laziness, miserliness, a lack of fashion instinct, or even as a fashion statement. I tried to imagine how I would feel if my tired clothing choices caused people to look upon me with pity.

The United Nations Development Programme’s Multidimensional Poverty Index looks at three primary dimensions of poverty: Health (if any members of a household are undernourished or have recently passed away); education (how many children are in or have completed school); and standard of living (if a household has cooking fuel, proper sanitation, drinking water, electricity, a sturdy structure, and assets).

The bottom line is that none of these factors are easily determined by a person’s appearance. Poverty is rarely observed at surface level, and its full impact is best observed in relationship—not as a passerby in a foreign culture.

I thought back on the times in my previous travels that I had made similar snap judgments about people I saw or encountered. I made assumptions based on preconceived narratives of African people as poor, helpless, and needy—and neglected to see the similarities between me and a kid who likes to play outside and happens to live in an arid climate.

As travel to previously unknown parts of the world becomes increasingly normalized, I pray that the Lord strips us of our assumptions of people and allows us to see people as they truly are.

Want to prepare well for your upcoming trip? Read this post about the postures we recommend for approaching short-term trips.

2 responses to Dust-covered kids: what poverty doesn’t look like