During the Rwandan genocide, some estimate that more people were killed in churches than anywhere else. Seventeen years later, HOPE’s savings groups are helping families who lost faith in the Church rediscover faith in God. 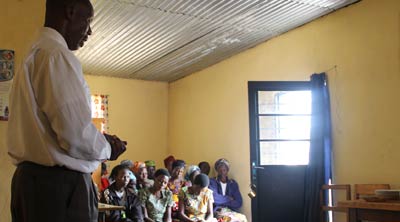 Certainly I had heard of the Rwandan genocide before my recent trip to Rwanda, but like many Americans, I spent 1994 hearing more about the O.J. Simpson trial than the more than 800,000 Rwandan men, women, and children who were brutally slaughtered in 100 days half a world away. When I learned that I would be going to Rwanda to interview HOPE’s clients, I decided to read everything I could about the genocide and the difficult years that followed to help me understand the context of the individuals I was about to meet.

Much of what I read surprised me: like the fact that historical categorization of Hutus and Tutsis was economic —not cultural, linguistic, or geographic—and could change with personal circumstances; that many genocide perpetrators knew their victims intimately; and that the genocide’s masterminds intentionally implicated as many individuals as possible in the killings to increase the efficiency of their “final solution,” dilute guilt, and impede efforts to bring perpetrators to justice. But what I found particularly shocking were the heartbreaking stories of the Church’s complicity in the genocide. Many Rwandans sought refuge in churches, and while some church leaders’ sacrificial efforts saved their congregants, others either failed to oppose the violence or openly abetted it. Some estimate that more people were killed in church buildings than anywhere else, as a perceived sanctuary became instead the setting for some of the greatest horrors of genocide.

I wondered how this might impact HOPE’s programs in Rwanda, where we work in close partnership with local churches. What had men and women come to associate with the Church?

When I arrived in Rwanda, it didn’t take long to observe vestiges of the genocide in the monuments, mass graves, and work crews in matching jumpsuits, which my interpreter explained were made up of convicted génocidaires. When clients opened their meetings in prayer, they thanked God that they were “safe now.” They also talked about the long path to forgiveness and about learning to see that all Rwandans had suffered as a result of the genocide, regardless of ethnicity. Many of the client meetings I attended were held in churches, and I began to wonder if the Church’s reputation had not been tainted as I had imagined.

The answer came from Joseph, a field coordinator for HOPE’s saving circle program that works in partnership with the Anglican Church of Rwanda. He started timidly, “You know, in our background, in our history, what happened to Rwanda: war, genocide, and hatred,” but quickly grew in conviction, “these things leave people wounded in different ways.” He explained that through the saving circles the Anglican Church hopes to aid in Rwanda’s recovery: economically, socially, psychologically, and spiritually.

He outlined five goals of the savings program—prayer, reaching families with the Word of God, unity and reconciliation, poverty alleviation, and fellowship—and the importance of each element. “There are many who can’t come here to the Church,” he said. “They’ve been wounded by what happened. … Savings groups help the Church reach people with the Word of God. When this Good News, this Gospel, reaches those who are not coming to church, the Holy Spirit can come in and open their hearts. Sometimes the Holy Spirit sets these people free.”

God is working through HOPE’s savings groups, as evidenced by reconciliation between members of different ethnicities and the sense of family within many groups. These groups don’t just save together; they work, pray, and minister together. Together they dig plots of land for widows, care for orphans in their communities, and assist those wounded in the genocide. “That kind of outreach helps people trust the Church and come to be part of it,” Joseph explains. As a result, many non-Anglicans are beginning to ask to participate in the saving circles, and many families who lost faith in the Church are rediscovering faith in God. “When we achieve these [five] goals, we are building Rwandan society at the same time that we’re building the Kingdom of God. The journey is still long, but we hope—we believe—that God is going to help us achieve our goals.”

One response to Redeeming the Church